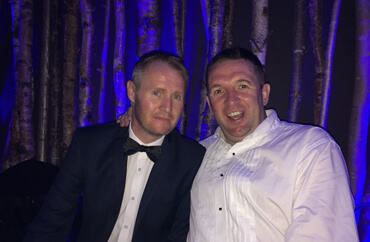 IM Events were privileged to be asked to host the "Eat, Drink & Be Merry" Gala Ball at The Halston in Carlisle. Ably supported by local band Three River City and local DJ's Amp & Dex there was a grand total of over £10,000 raised on the night....the highlight being a bid for a box of Cheese XL Crisps that achieved £250!!! An amazing night for an amazing cause and, hopefully, this will turn into an annual event. Well done to everyone at SH Electrical for organising a brilliant evening. 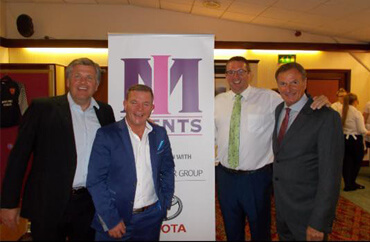 IM Events was delighted to help organise, co ordinate and MC the Sporting Dinner to celebrate 10 years of Crusaders FC. The Liverpool Legends night was a resounding success with some brilliant stories from legends Phil Thompson, Jan Molby & Dean Saunders. With fantastic support from Comedian Lester Crabtree Crusaders celebrated their anniversary in style with a fantastic event. 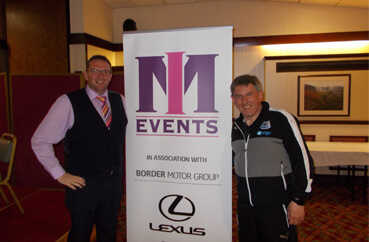 Unisun Athletic hosted their first ever Sporting Dinner at The Shepherds & Auctioneer with Carlisle United, Newcastle United, Liverpool, Everton & England legend Peter Beardsley. With Ian from IM Events as organiser, MC & interviewer, on the night, Peter participated in a Q&A covering all aspects of his career through to his current role with Newcastle United. Pedro was thoroughly professional and thoroughly entertaining and the 200+ attendees at the event had a fantastic evening. Unisun's 2018 event is currently in the planning stages. 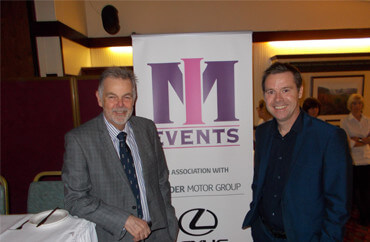 Former England Test Cricketer and Chairman Of Selectors Geoff Miller was the guest speaker at a Sportsmans Dinner to raise funds for Carlisle Cricket Club at The Shepherds & Auctioneer in Carlisle. With some fantastic stories of his time as a player and then a selector he was brilliantly supported by Scouse Comedian Jamie Sutherland. The feedback from the night has been brilliant and the Cricket Club are planning to make this an annual event due to the success of this night. 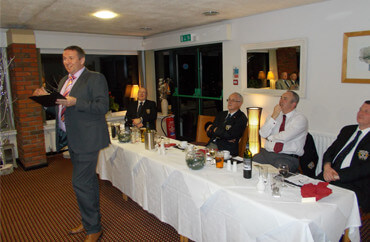 I was delighted to be invited to speak at this years President's Dinner at Brampton Golf Club. I've been a member at the Golf Club for 35 years and it was brilliant to entertain the current Executive Committee and Current & Past Captains. I managed to keep them entertained with some of my memories during my time at the Golf Club and a great night was had by all. 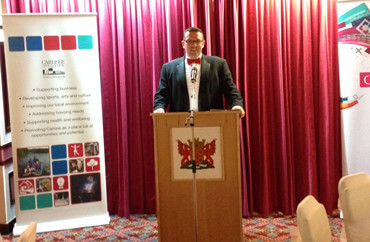 It was an honour to be Master Of Ceremonies at this years Civic Dinner at The Shepherds & Auctioneer. A mix of honoured and distinguished guests, including this years Mayor Of Carlisle Colin Stothard. All were treated to some fantastic speeches from Vice Chancellor of the University Of Cumbria Julie Mennell as well as leader of Carlisle City Council Colin Glover and the Councils Chaplain Reverend Keith Teasdale. 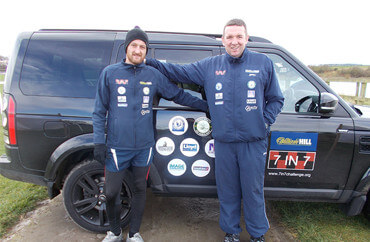 IM Events were very proud to be involved in the organisation and fundraising effort for the 7in7 Challenge. John Reay, Secretary of The Horse Racing Syndicate The Six Thix, completed 7 marathons in 7 days at Racecourses in England which finished the day before the Cheltenham Festival. The event took us to Newcastle, Catterick, Carlisle, Leicester, Hereford, Warwick & Stratford. John completed each marathon in less than 4 hours and will raise somewhere in the region of £10,000. 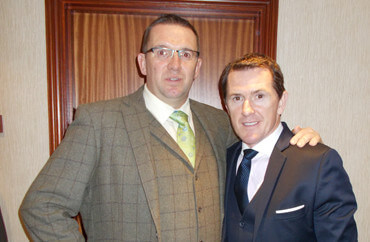 The greatest Horse Racing Jockey of all time was the guest speaker at The Shepherds & Auctioneer in front of an audience of 350. Although Storm Doris tried to do it's best to put a dampener on the night Sir AP was absolutely brilliant and kept the audience entertained superbly with tales of his career both in and out of the saddle. He was interviewed by former Jockey and ITV Racing's Luke Harvey who was the perfect host. This brilliant night was started by fantastic North East Comedian Mick Munroe. 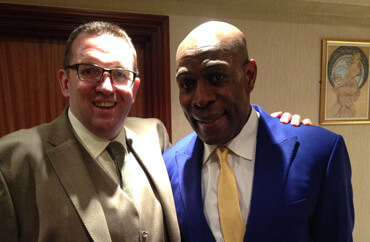 An audience of just over 200 were entertained by one of Great Britain's most loved Boxers. A wonderfully honest and humble man he spoke brilliantly about his career and the troubles he has gone through in his personal life since his career finished. Frank was supported by North East Comedian Terry Joyce and the night was hosted by Lester Crabtree with Ian Milburn from IM Events. 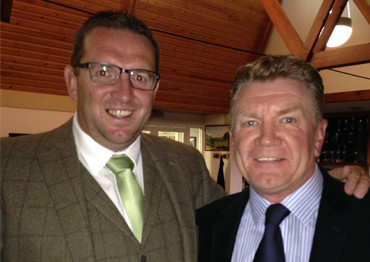 The 2016 British Mens Senior Open Champion treated an audience at Brampton Golf Club to a number of entertaining stories from his time on the European Tour and as part of the 1991 Ryder Cup Team. Thoroughly professional and highly entertaining Paul was supported by brilliant Comedian Terry Joyce. 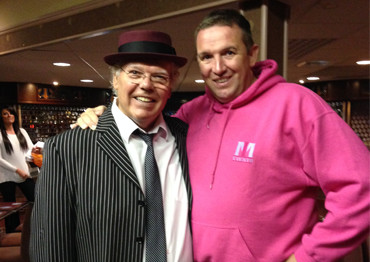 An audience in the Harraby Catholic Club were treated to a unique evening with Royston Vasey, the man behind the infamous Roy "Chubby" Brown. With stories of his troubled childhood through to his rise as "Chubby" the night was a huge success. He finished the night to a rendition of "Living Next Door To Alice" and a standing ovation. 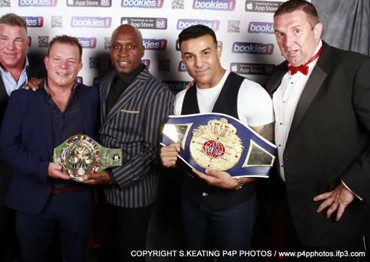 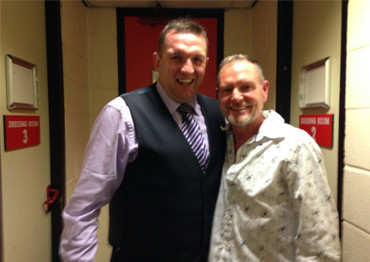 A packed out Sands Centre, in Carlisle, were treated to a wonderfully entertaining evening from, arguably, one of Englands greatest Footballers, who was supported from Britains Got Talent finalist Danny Posthill. "Gazza" had all of the packed out crowd on the edge of their seats with his stories from his early days at Newcastle right through to his finest England performances. He left to a standing ovation. 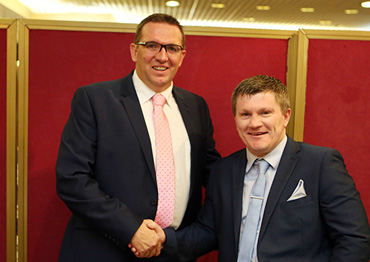 With a donation of around £2000 for Eden Valley Hospice from this event, again IM Events in association with Clubland Entertainments, the Evening With Ricky Hatton was a fantastic success and the 282 attendees at The Shepherds Inn, Carlisle had a tremendously entertaining evening. With Tony Roscoe Comedian on the night the feedback from all guests has been excellent. Ricky Hatton did not disappoint anybody with his stories from his sporting career and we hope to work with him, again, in the future. 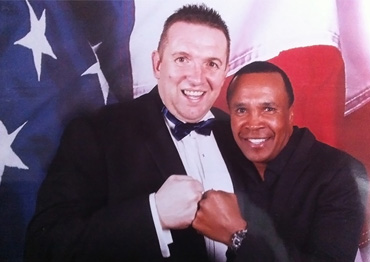 IM Events, in association with Clubland Entertainments, hosted An Evening with Sugar Ray Leonard at The Halston Aparthotel in Carlisle. There were 313 attendees on the night and we raised between £1400-£2000 for Eden Valley Hospice. With a 2 course meal, your Host/Comedian Lester Crabtree and Sugar Ray Leonard, guests were treated to a fantastic nights entertainment with a world sporting icon.